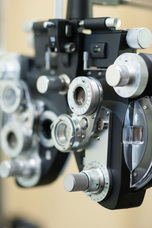 Dr. Carol F. Merritt started her private optometric practice in October, 1989 immediately following her graduation from the University of Missouri-St. Louis. The office was located at 4144 Lindell Blvd. sharing space with Dr. Alexander Harris. Due to the rapid growth of the practice, after eight months, Dr. Merritt relocated and moved in June, 1990 to the Northland Medical Building on the corner of Lucas-Hunt and West Florissant. While practicing there, Dr. Merritt outgrew her original suite and moved to a larger space on the 3rd floor. She was working full-time as an associate professor and later center director at the University of Missouri-St. Louis School of Optometry.

After eight years of juggling a rapidly expanding private practice and full-time teaching position, Dr. Merritt resigned from the School of Optometry in April, 1998 and entered private practice full time.

Also, in April of 1998, Dr. Merritt opened a second location at 45 Black Jack Ct. With over 2,000 square feet of renovated office space, the practice continued to grow and expand in the Black Jack area of North St. Louis County. With two locations, Dr. Merritt serviced much of North St. Louis County with premier optometric services allowing her patients to understand the importance of having a private eye doctor in addition to a primary care doctor.

In August of 1999, Dr. Merritt closed the Northland Office Location with the impending notice of re-development of the Northland Mall and the demolition of the medical building.